We are happy to confirm our 2019 Electric Sky will be Thu-Sun, July 25-28th, and our collaborative installations will be oriented around the theme “Bio Zoom”. It will be a year of art, tech and science, and we invite you to explore how changing perspectives –whether through a microscope or a telescope — exposes the beautiful, abstract, often fractal, repeating patterns of the universe.

Apply for support in the form of free tickets or budget to cover costs, deadline April 30th 2019

Register to save your camping spot! Note no registration required for day visitors.

Our fourth Electric Sky was a swimming success, and we can’t thank everyone enough for all their great participation in making this special event happen! Be sure to check out our slides from 2018 to get a sense for what it was like.

For Electric Sky 2018,  our collaborative installation will be oriented around the theme “The Digital Frontier”,  celebrating the pioneering spirit of those who push the bounds of possibility by innovating on the frontier of technology. 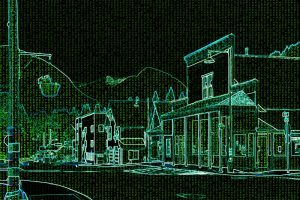 For this group installation, our basic framework is to provide an overarching design theme “Explore recurring historical themes of human progress on the frontiers of innovation, layering the past with the future”, and then recruit artists, technologists, scientists, and designers to take on aspects of that theme, playing with technologically-infused, sensing, interactive and self-illuminated sculptural elements.  Learn more about the Digital Frontier here.

Call for Participation — Apply for a Microgrant!

If you are excited by the idea of creating an individual or collaborative project around our theme “the Digital Frontier” we invite you to apply to be a supported participating artist or creative technologist, to receive free tickets and funds to support your project. Participating artists and technology creatives may include visual art, sound, video, performance, landscaping, architectural elements, and so forth, however all projects should incorporate an electronic or interactive component consistent with the theme.   Learn more about our requirements and find instructions to apply here.  Application date is April 30th, 2018.

Please note that Electric Sky is designed as a cross between a hackathon and an artists’ retreat, so it is a great place to incubate new work in our Creativity Lab, with the help and expertise of fellow artists and creative technologists.  We strongly encourage you to participate whether or not you apply for a grant.  This is the place to explore very experimental projects that you are still figuring out.

Save your spot! Registration is required for anyone spending the night to save your camp spot. If you are just there for the day or for the Saturday night show, registration is not required.

This years’ Electric Sky was a resounding success and we cannot thank everyone enough for your active participation!  (For more imagery, check out our summarizing slide show or  see our video).
Our primary goal with this event is to foster the community of creatives at the intersection of art and technology in the Pacific Northwest – building collaborative relationships, developing best practices, engaging in life-long learning, and inspiring new innovation.  Our secondary goal is to share the art generated by the event with the public, and in particular with the small rural communities of the Skykomish River valley. 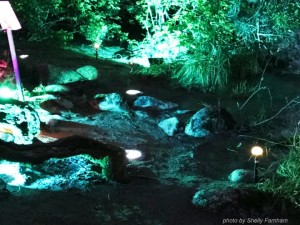 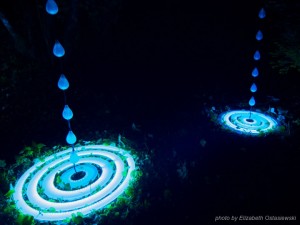 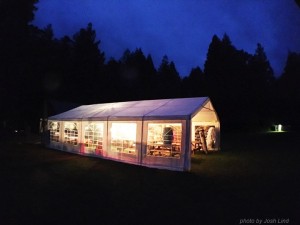 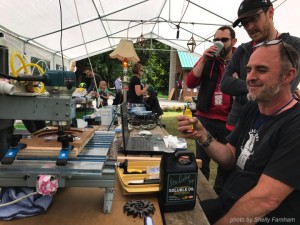 This year we organized our collaborative efforts around the “Wondering Woods” theme, exploring what if the woods could talk?  What if they can sense you and respond?  As a part of this effort we hosted a pre-event workshop instructing artists and tech creatives how to use sensors, and at the event we had a CNC router workshop and a project-based workshop for kids to engage with the environment and integrate sound into a group installation.  We also hosted an open creativity lab to encourage emergent on-site collaboration in the style of hackathons.  A total of 71 art and tech creatives attended, including 12 kids, and 40-50 visitors from the region came to our opening night party. 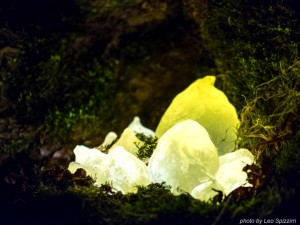 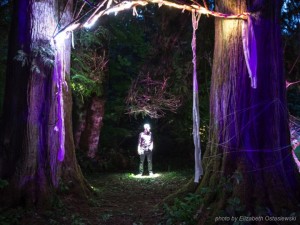 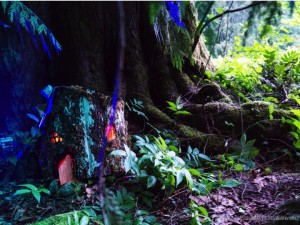 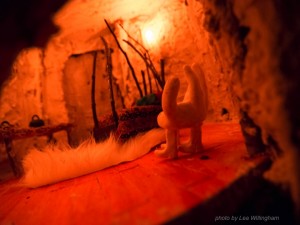 The Lordly Ones Closeup

This was our third year, and thanks in large part to our grant from 4Culture, which we used to fund new projects, we observed the depths of the interdisciplinary collaborations and the quality of the art achieve a new level.  Electric Sky is evolving into not only an art and tech retreat, but a new works incubator.   We are very happy to report that we have been invited as a collective to return to both Lusio and Arts-a-Glow to share our Wondering Woods installation with thousands more in Seattle and Burien. 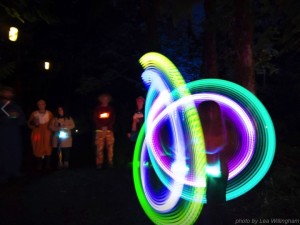 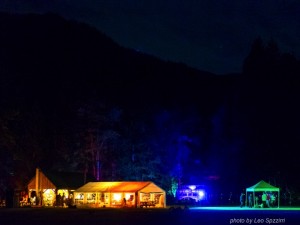 Do you want to see more? Check out our summarizing slide show.
Part I shows overview of the Electric Sky event, and Part II shows the “Wondering Woods” art.
Some of the art was animated, interactive, or included sound, so we made a 2-minute video with some highlights.  See our video. 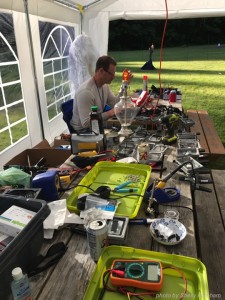 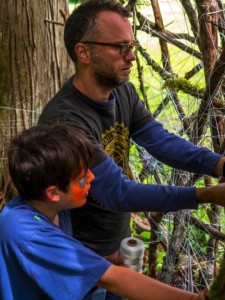 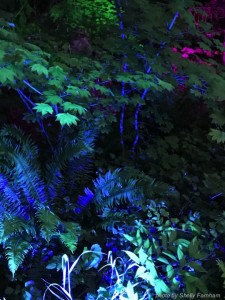 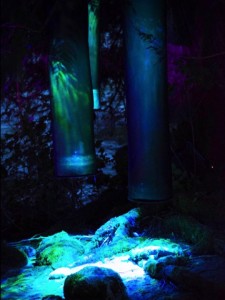 Here are some more photos shared by community members:
Shelly Farnham.
Jole Sack.
Leo Spizzirri.
Elizabeth Ostasiewski
If you are excited by what you see, why wait until next year to get involved? Check out our community page.

Electric Sky is shaping up to be fabulous event!  Find our lists of participating people and projects in the ArtsTechNW Spokin community.  (Spokin is our networking tool for creative, collaborative communities.)

You can add yourself and your project(s) to the community and join the conversation by requesting to join ArtsTechNW. 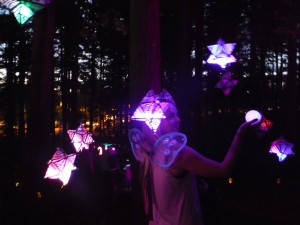 We our focusing this years’ group collaboration around the theme “The Wondering Woods”.  Help us explore the question: what if the trees could talk?  What if the forest was a living, conscious, interactive being?  We have small grants (200$-1000$) and free tickets to support participating creatives.  If interested, please learn more about the theme and check out our application.  Due date is May 1st.

Get involved!  We are looking for help with our group meal, signs, promotion, reception, opening party bar, path layout, and so forth.  You’ll meet great people, and active volunteers get a free ticket!  please email shelly at totallylegitllc dot com to ask about how you might want to volunteer.

We are very excited to announce our third Electric Sky will be in the Skykomish Ball Park this summer  June 8-11th.  Can’t wait to see you all there!

[crossposted on recreationallightandmagic.com] Our Luminous Garden project was so popular this summer we adapted the group installation to be an indoor show, displayed the winter of 2016/2017 at the Vermillion Art Gallery and Bar, and in the Skykomish Maloney Store.  The theme was “taking a walk in an otherworldly garden”.  At the Maloney Store, we had a pop-up maker lab in the back of the show, so we could continually add new pieces to the show over the course of the month.

This show is an evolving, large-scale collaborative installation that originally emerged from Electric Sky 2016. 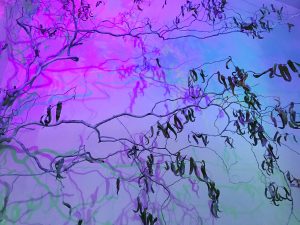 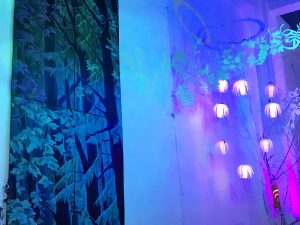 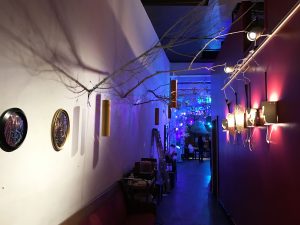 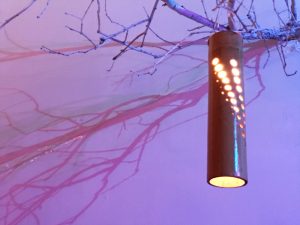 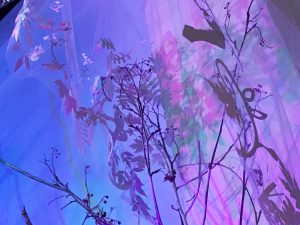 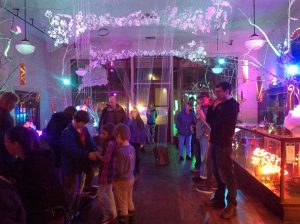 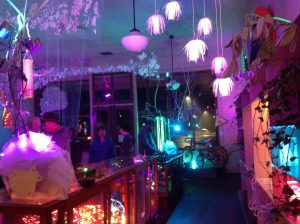 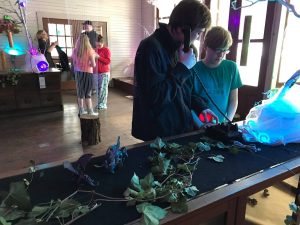 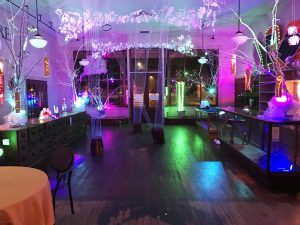 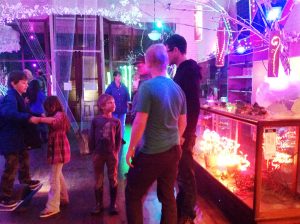 We were very excited to be able to bring the Luminous Garden for a one month show back to the town of Skykomish in the historic Maloney Store.  It was a great way to engage with the locals who weren’t able to check it out this summer or while it was in Seattle.  We even had the local school students visit for an impromptu workshop.

Thanks very much to the town of Skykomish for letting us have the show in the Maloney Store!